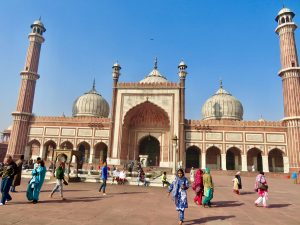 Jama Masjid of Delhi, one of the grandest mosques in India.

Your first encounter with vibrant India may involve surreal scenes like swarming crowds lining the airport arrival area, a lone cow wandering through chaotic traffic, the persistent blaring of car horns, hard working farm women in their brilliant coloured saris or trucks so overloaded they look like they might tumble on their side. Wherever you look in amazing India it is a feast of sights, colours, sounds and smells. 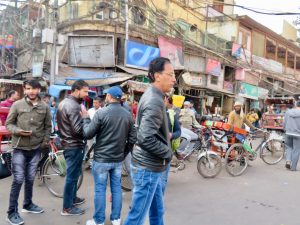 Delhi the capital of India is a city of 19 million people. The city is choked with smog and plastic waste but there are efforts to improve air quality with natural gas-powered Tuk Tuks. Traffic is a nightmare and it takes a lot of careful planning to get anywhere on time, an hour to get from the airport to the city centre.

Delhi is made up of two parts, Old Delhi and New Delhi. Our tour would include some of the highlights of both cities but we were aware we would only be scratching the surface of this vast metropolis.

In Old Delhi we visited the famous markets that curiously don’t open until after 11am. The crowded, narrow lanes are bursting with colours, noise and energy of everyday life. These fabulous bazaars and spice markets are where you will find streets devoted to weddings, flowers, cycles, kitchenwares, fabrics, electronics, clothes, just about anything under the sun. 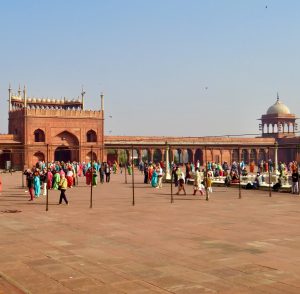 Near to the Old Market is Jama Masjid of Delhi, one of the grandest mosques in India. On a Friday up to 25 000 men pray here, so not a good day to visit. The Mosque was started in 1644 and ended up being the final architectural extravagance of Shah Jahan, the Mughal emperor who built the Taj Mahal and the Red Fort. 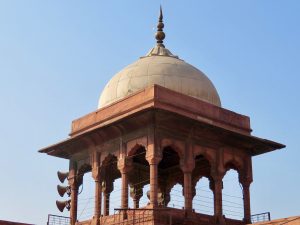 Our next stop was Gandhi’s Tomb or Raj Ghat a memorial dedicated to Mahatma Gandhi. The place is well kept and should be viewed from ground level and then from the ramparts above. For most Indians, Gandhi was a heroic, passive freedom fighter whose efforts led to the British hand over of India in 1947.

Humayun’s Tomb is a world heritage listed site which is monumental in scale and grandeur of design with its pink facade, white vaulted marble roof and garden setting. Built by Humayun’s wife nine years after his death, this magnificent garden tomb is the first substantial example of Mughal architecture in India.

Inside the complex there are four garden squares with pools joined by channels. We climbed the steep steps to the wide terraced platform with deep vaulted cells on all four sides. Humayun’s garden-tomb is also called the ‘dormitory of the Mughals’ as in the cells over 150 Mughal family members are buried.

Another UNESCO World Heritage site we visited in New Delhi was Qutub Minar, a minaret that forms a part of the Qutub complex. Qutub Minar is an awe inspiring 73-metre tall tapering tower of five storeys and contains a spiral staircase of 379 steps.

As far as minarets go this is an outstanding example of Iranian architecture, likely patterned on Afghanistan’s Minaret of Jam and adapted to local artistic conventions by the incorporation of looped bells, garlands and lotus borders carved into its exterior. 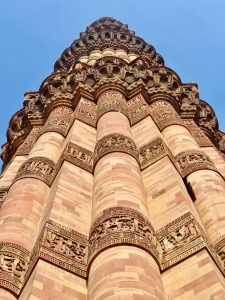 A visit to New Delhi is not complete without a drive past the India Gate. The Gate is a war memorial for soldiers killed in various wars. The Gate evokes a sense of a triumph and it is often compared to the Arc de Triomphe in Paris. We asked our driver to stop for a few pics. If you have the time you can cross the busy road and stand under the arch. 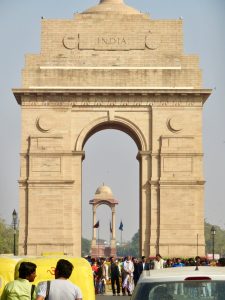 Our final stop on this busy tour was Gurudwara Bangla Sahib, perhaps the most famous Sikh temple in the world. To visit this sacred place it is important to leave shoes at the kiosk on the way in and also tie a special brightly coloured scarf around your head, symbolising respect for the revered Sikh gods.

We were absorbed by the lessons our guide shared about Sikhism, the sacred pool located within the complex and ‘Langar’, the sharing of food by all people, regardless of class, at the enormous on-site kitchen. This is another side to Dehli not to be missed.

Being out in India certainly has its challenges and we heard a number of stories from gay Indian men about how it is necessary to marry a woman or to tell parents they are “thinking, thinking thinking” to stave off the almost inevitable wedding day. 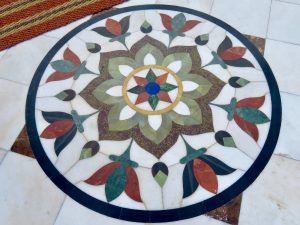 Unfortunately, there are almost no gay venues in New Delhi. However, one oasis is Chez Jerome Q Café a bar and restaurant that welcomes all LGBT travellers. Also, on the top floor of the same building is Mykonos Spa a huge sanctuary for men located over three floors.

Connaught Place is located in the very heart of the city with some great hotels, a wide range of restaurants and bars, excellent shopping, cinemas to catch the latest movies and Janpath Market, well worth a stroll. The ring of colonnaded Georgian-style buildings of Connaught Place can make the area a little confusing at first but it is very safe for tourists and we found no problems walking from our hotel and wandering freely around the area at night.

We stayed in the Lalit Hotel just a short distance from Connaught Place. Although the location was outstanding, it’s five star rating is questionable, considering the bedlam we faced trying to be seated for breakfast in the mornings and the tired decor of our room. 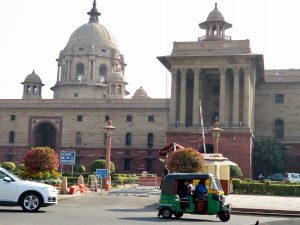 Departing for our next destination we drove for quite a few hours to finally escape the traffic and outer limits of this immense city .

Observing the frantic pace of life and reflecting on the spectacular structures we had visited during our short stay we made a pact to return as soon as possible to this fascinating urban leviathan and more fully explore its alluring and exotic, hidden treasures.

Know Before You Go 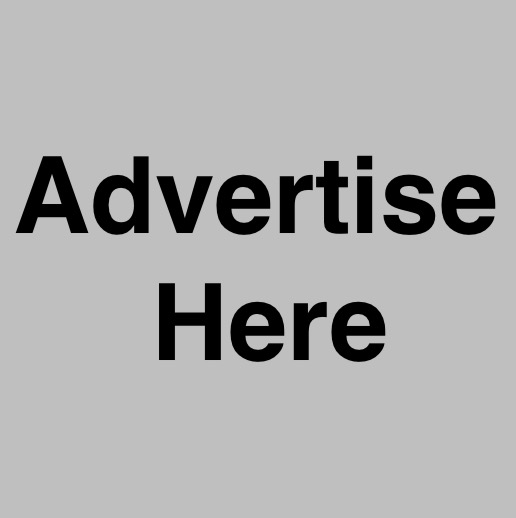